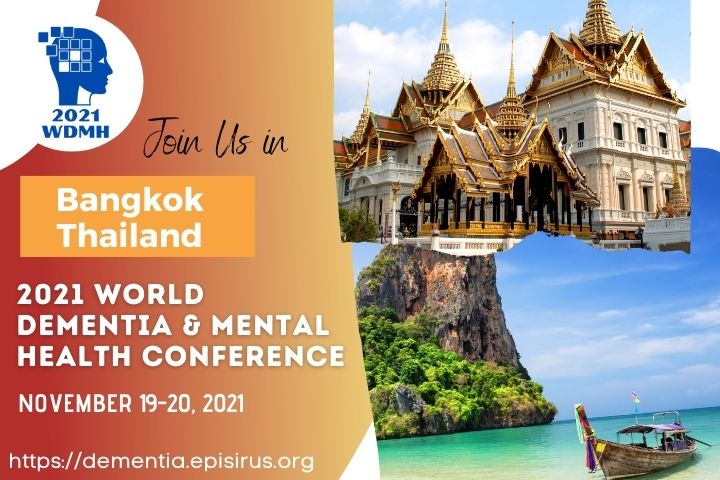 Memories Matter: Until there is a CARE there is HOPE!!

With COVID 19 pandemic has disrupted normal life and the new normality has taken place, it has become challenging for some participants to participate in the conference physically. However, we are very sure that due to vaccination drives taking place until November, it will be possible to hold the physical conference. Still, we don’t want any of our participants to miss out. Hence, 2021WDMH will have the option to participate virtually as well.

2021WDMH is fully prepared to deliver online the unique interactive experience we offer each year at our physical meeting. We are determined that none of our international colleagues will miss out on any of the conference sessions, nor the opportunity to present his or her work to colleagues from all over the world.

We hope you understand and support this move and look forward to welcoming you to the 2021WDMH Conference from Friday 19th November 2021 to Saturday 20th November 2021.

Theme: Memories Matter: Until there is a CARE, there is HOPE!!

Episirus Scientifica would like to take the opportunity to announce the commencement of the 4th Edition of the 2021 World Dementia and Mental Health Conference.

2021WDMH will provide a platform that brings together eminent neurologists, psychiatrists, psychologists, neuroscientists, and many more. The gathering incorporates prompt keynote sessions, symposiums, workshops/Special Session and offers exceptional sessions, presentations with a great education, and networking opportunities for all levels of academic professionals. And also, a great opportunity for the young researchers to share (oral/poster presentation) and a scope to learn from experiences shared by distinguished participants.

If considered globally, around 50 million people have dementia, and there are nearly 10 million new cases every year. Dementia, a syndrome in which there is retrogression in memory, behavior, thinking, and the ability to perform activities. It mainly affects older people and is one of the major causes of disability and dependency. It is important to understand what causes the diseases so that effective treatments can be developed and improved ways of providing care can be implemented. But to have progressed in this research field, we need more researchers to take part, and hopefully, one day, research will lead a way to find a cure.

The conference will gather participants from all across the globe to share their experiences and knowledge in the field of Dementia. Best networking will spread awareness that delivers new opportunities for people to play their part in beating dementia.

Thailand has long been a popular choice for conference meetings and events in Southeast Asia as it has been known for its legendary hospitality services. The vibrant capital city of Bangkok is the top and best destination for organizing international conferences. The newly opened Suvarnabhumi International Airport handles passengers of over 40 million per year from the most major cities in Europe, Asia, and North America and connects the city via electric rail.

Dementia is a collective general term for memory loss and other cognitive declines, such as forgetfulness. It is a symptom of several underlying brain disorders and diseases. Alzheimer’s disease is the most common cause of dementia, a continuous decline in behavioral, thinking, and social skills. The signs and symptoms include memory problems, communication difficulties, changes in mood and behavior, difficulties with organizing and planning one’s day-to-day life, and the gradual loss of control of physical functions.

Aging is just a part of the life cycle. A person is born, goes through childhood, adolescence, and adulthood, and begins to age at a certain point in time. Occasional lapses in memory that disrupt daily life are not typical of aging; they may be a symptom of dementia.

Vascular Dementia has generally termed a decline in reasoning, planning, judgment, memory, and other thought processes caused by conditions like stroke that reduce or impaired blood flow to various brain regions. Inadequate blood flow can damage and eventually kills the brain cells. Brain cells need a constant supply of blood to bring oxygen and nutrients, to be healthy and function properly. Blood is transferred to the brain through a network of vessels called the vascular system.

Psychiatry is the field of medicine focused on diagnosing, treating, and preventing behavioral, emotional, and mental disorders. Psychiatric or mental disorders are symptoms characterized by clinically significant disturbance in an individual’s cognition, behavior, or emotion that reflects a dysfunction within the psychological processes underlying mental function.

Some studies have suggested that patients with dementia have a decreased risk of being diagnosed with cancer, and cancer patients have a lower risk of dementia. Dementia is usually preceded by cognitive impairment, during which pathophysiological processes underlying dementia may already be present. Since a shared pathology between cognitive problems and cancer has been hypothesized, a logical question emerges whether cancer and cancer treatment are also associated with an increased risk of dementia.

Cognitive impairment is when an individual has trouble remembering, concentrating, learning new things, or making decisions that affect their everyday life. Cognitive disorders are caused due to hormonal imbalances in the womb, genetic predisposition, environmental factors, and other common causes of the cognitive disorder include substance abuse and physical trauma.

All the people working in dementia care face a difficult situation and have to make an ethical decision every day. The Caregivers need to balance the needs of their patients while considering patient privacy, the potential risk, and abuse, the benefits including medications, and procedures. If the patients cannot make decisions and express their will, then their guardian or the designated decision-makers must step in to make the difficult decisions. Download our brochure to know more about the session talks to be presented at the live webinar. The exact timings will be released 30 days prior to the conference. Hurry ! the early bird registrations are going to close soon by July 30, 2021.