Psychiatry vs Psychology and It’s Role during COVID 19 Pandemic 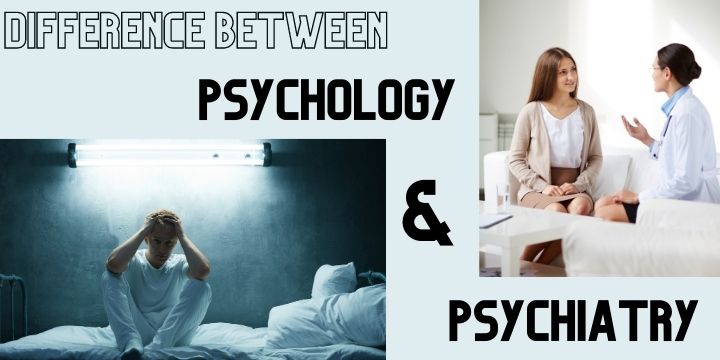 The term Psychology and Psychiatry is interrelated-as both are essential for the overall development of the minds of the people. Psychology deals with the behavioural changes of the mind whereas psychiatry deals with the mental illness. However a gigantic advancement has been noticed in both these fields over years.

Psychology which was once considered to be insignificant has reached the pedestal position in various fields like education, job facilities and medicine. It acts as an eraser clearing the glitches which is leading to mental disturbance-like depression, frustration, panic and so on. Thus, psychologists are highly demanded in schools, industries and clinics.

The school psychologists deals with the mental problems of the school students and  encourage them to face such issues that normally children hesitate to communicate with their parents. For instance- sexual harassment, parental issues that drives them into trauma or any kind of psychological interruption. Similarly,

The industrial psychologists helps all the employees at the workplace to overcome all  the pebbles that is causing disruption to their process of thinking and helping them to fight against it. Due to peer pressure and complete relying on technology, people working in the IT sectors mostly face lots of issues related to health like dizziness, irritation, depression, anger and so on and they look up for a counsellor who can guide them how to handle up the circumstance and work efficiently with a fresh mindset.

We also find psychologists who comes into play whenever there is a case of advice. For instance-the ones who helps in selecting proper career. There is also another category of psychologists who are found in clinics – they listen to the problems that is abating one’s mind over and over again like there may be cases of no sleep, anxiety attacks and so on . There are also psychologists who helps at the time of advice in terms of pregnancy in the health sectors.

In this way psychology has graded up itself in today’s 21st century. This branch of science can also be  designated as a human friendly subject as it renders help and gives courage to so many people to face the odds and strife efficiently. Now if I talk about its importance in today’s world, due to pandemic everybody is more inclined towards social media, electronic gadgets, as the whole education system is conducted through online mode. Mental problems like depression, irritation, frustration and so on has increased at a large pace. It is only a psychologist who can help us to get rid of these problems. Thus, job scope is vast, a good profession novice and the salary is also a descent one.

All about Psychiatry and It’s Growth in 21st Century

Now coming to psychiatry; but this time it’s about combating the stigma of mental illness. This field is all about growth; rather a rapid growth. The job opportunities are quite well, and is expected to grow more. The various curves to this field in terms of genetics , approach in treatment , modern techniques, research has given a new aura to this study. Human imaginations are sometimes driven by the mental affliction. The challenge lies how we should showcase this profession. The optimistic side of it.

Earlier medical fields lacked modernization in the path of treatment. However, now the psychological drugs and treatments raged up over years. The drugs can even be toxic if it’s taken under no such medical grounds resulting to neurological disorders.

Assumptions or rather myths cannot be varnished easily as people does not consider it to be as likeable as they do for the surgical ones. In India, as mentioned earlier, depression, leading to schizophrenia, alcohol misuse and so on is found common nowadays; but now dementia is another  very common neurological problem which is found in this era. Several dementia conferences are being organised every year to promote research on research and other neurological conditions. One of such dementia conference 2021 is being organised in Bangkok, Thailand this year.

There are certain measure taken to lower the growing cases of depression and dementia like campaigns are conducted to understand the mindsets of the people by  taking public opinion into consideration, neurophysiological abnormalities are being identified for post-traumatic stress disorder that helps to bring new treatments to this field and also anti psychotics are given to the patients which are normally cost effective. One of the new treatments to cure depression is by Repetitive Transcranial Magnetic Stimulation. Research on identification and characterization of the enzymes responsible for cleaving beta amyloid has created the possibility of rational treatments for Alzheimer’s disease. All these data show a growth and progress in the study of Psychiatry.

In this world of struggle ,hardships, sufferings, broken dreams, dullness we homo sapiens deal with emotions like romanticism as well as emotions like failure. To balance the optimistic as well as the pessimistic side of the public, psychology (being the primary lotion) and psychiatry (being the secondary lotion to drive out  lunacy)  work skilfully and has been reached heights in their respective fields, helping in building the strong pillars of confidence within the minds of the people.